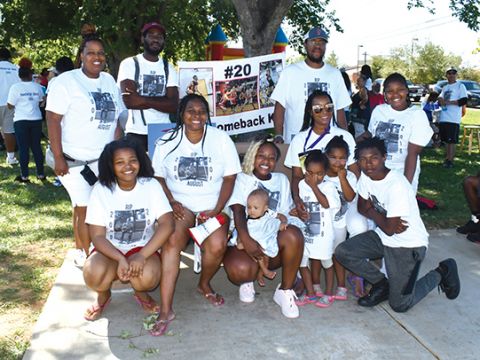 The Augusta family at the dedicated bench. Photo by Rick Sloan 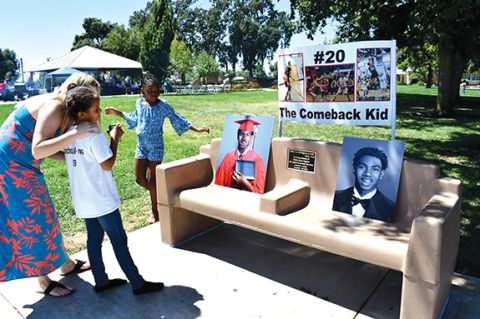 RANCHO CORDOVA, CA (MPG) - This month Cordova Recreation & Park District (CRPD) added a significant item of remembrance and meaning to White Rock Community Park: a memorial bench dedicated to Calvin James Augusta who passed away in August of 2018. A leading wide receiver for the Cordova High School Lancers and varsity basketball national scoring leader, Calvin’s impact on his community went beyond athletics. He was friends with everyone, smart, charismatic and vital to the Mentees at Cordova High program (M.A.C.H).

Calvin’s mother Sharea Thomas reached out to the District in May to propose this memorial bench project to honor Calvin’s life. When he passed away, Sharea said she cremated her son, not knowing how important it would be for the community to have a place to sit and talk to him. When the community asked for a space to be with him, she began working with CRPD’s Park Planning & Development team to provide this safe space for the community to grieve.

In June, at the Regular Meeting for CRPD’s Board of Directors, over 40 community members including Calvin’s family, friends and mentors, flooded the Council Chambers to express their need for this bench, reflecting a fierce commitment to their mission to bring awareness to mental health and suicide prevention.

Sharea was the first to step up to the podium, showcasing her son’s role in his community. “He passed away by means of suicide August 14th, 2018, four days before his 18th birthday,” Sharea said. “He was a pillar to his community, a pillar to his friends and a pillar to his school, a Cordova High alumnus, a two-sport athlete… He did everything for everybody, and he was everything to everybody,” Sharea said. “This bench will be so much more than a bench. It will be a safe place for the community to grieve and a place of awareness for mental health and suicide prevention. This bench will speak volumes beyond providing counselors, suicide hotlines and other resources,” Sharea said.

Director of the M.A.C.H. program, Conrade Mayer, brought a group of young men to the podium to speak on what Calvin meant to them. During this process, he mentioned these boys would be an ally to the District, especially White Rock Community Park, the home of Calvin’s memorial bench. “The bench will be sparkling clean, the area will remain clear of trash, and nothing will be allowed to happen to it because these boys won’t allow it,” Conrade said.

M.A.C.H., a mentoring program for at risk and underperforming high school students in Rancho Cordova, strives to empower youth to make choices that enable students to maximize their potential. These young men and women focus on academic improvement and community service, including mentoring younger students, clean-up days, volunteering and more. Many of the boys who spoke are, or were, part of this program and grew up with Calvin as a brotherly figure.

“He was a great listener… caring and always the first person to check up on you, even if you didn’t know him well,” one of the boys named Miguel said.

“He was something special. He always brought that good vibe, great energy that nobody else has,” another named Jamie said.

“[White Rock Community Park] is a park where we all live, the kids play on it, it feels like our park. There are good people here, and we raised the money for this bench. We want to show how much Calvin meant to us and have a place for them to heal,” Donna Brown said.

“We want that bench to represent a safe place to express emotions. Everyone has sadness and experiences loss of some kind,” Constance Goins, Calvin’s aunt and Sutter Health psychiatric department employee, said.

All members of the Board shared moving sentiments and approved the bench placement without hesitation.

Aug. 18, over 200 members of the Cordova community united to support, recognize, and honor Calvin and his family during a Celebration of Life at White Rock Community Park on what would have been Calvin’s 19th birthday. To honor him and celebrate the addition of the memorial bench, CRPD donated White Rock Community Park’s event space for the celebration, which included a 3 v. 3 basketball tournament on the basketball courts Calvin loved.

T-shirts and necklaces with photos of Calvin were made for the event and worn to signify unification and commitment to spreading awareness. Promise Taylor, Calvin’s former girlfriend, felt this event truly connected the community, and encouraged them to heal together. “Promise would like to do an event like this every year or every milestone birthday to gather the community in support, but also to keep awareness at the forefront,” Nikki Taylor, Promise’s mother, said.

T-shirts and necklaces with photos of Calvin were made for the event and worn to signify unification and commitment to spreading awareness. Promise Taylor, Calvin’s former girlfriend, felt this event truly connected the community, and encouraged them to heal together. “Promise would like to do an event like this every year or every milestone birthday to gather the community in support, but also to keep awareness at the forefront,” Nikki Taylor, Promise’s mother, said.

Terence Lee, a basketball mentor to Calvin and community member, attended the event to support Calvin’s family and loved ones. “I was really touched that the plaque reflected who Calvin was, his faith and how much he will be missed,” Terry said. “The gathering was also moving because I work with the River City Christian Church’s basketball league and a lot of Calvin’s friends who were there have played in the league. It was a reunion of sorts, and it was so nice to see these kids who have grown up together remember Calvin and show the impact he had on them,” Terry said.

Other attendees also said there was a feeling of togetherness. “That would have been the part Calvin would’ve loved the most, it’s the part of Calvin I loved the most – his encouragement and inspiration and ability to bring everyone together,” Terry said.

CRPD Board Member Brian Danzl, a campus monitor and sports coach at Cordova High School during Calvin’s schooling, expressed Calvin’s leadership similar to Terry. “Calvin was that kid who had the other students’ ear,” Brian said. “He was that leader you could go to and say ‘hey Calvin, I’m going to give you the opportunity to go talk to this kid before I do and set them up for success,’ and he always seemed to have his head on his shoulders, was responsible and respectful, especially to adults,” Brian said.

Traits like this demonstrate why Calvin’s dedication to the community was gifted back to him by his church basketball league. “Calvin played in River City Christian Church’s spring basketball program for over five years. His basketball legacy and personality impacted the league so much that the league has established the Calvin Augusta Award for a player(s) who reflect Calvin's encouraging and inspiring persona during the season,” Terry said. 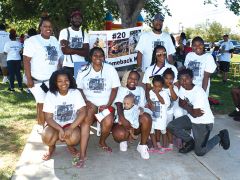 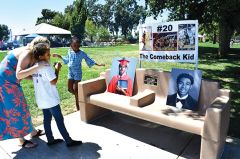 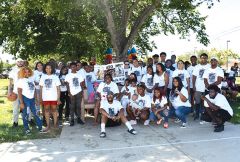