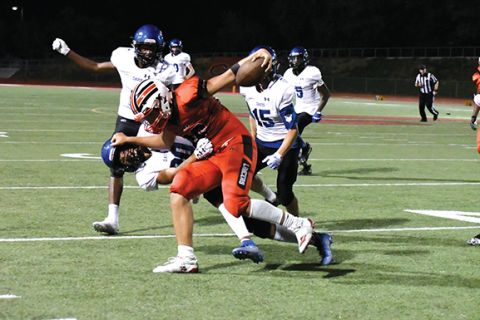 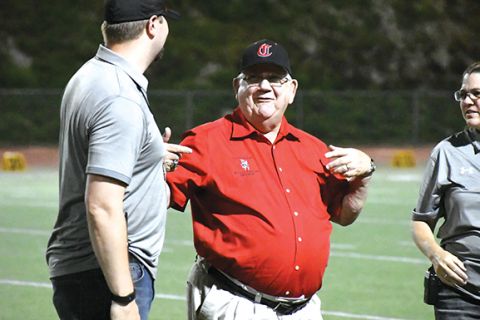 Legendary coach Max Miller, who has the most wins by a coach in school history, was honored at half-time. Photo by Rick Sloan

RANCHO CORDOVA, CA (MPG) - Sometimes, the scoreboard isn’t indicative of what actually happens on the football field during the course of a game.

Despite losing 64-0 to visiting Davis last Friday evening in their second-consecutive home game to begin the season, Cordova showed visible signs of improvement throughout the contest. The team played aggressively on defense, particularly early, when they forced Davis to punt on their first possession. The Blue Devils’ first drive featured three run plays stuffed for negative yardage by an attacking Lancers’ defensive front, which fired up the home sideline and fans.

“I thought we played a better football game than we did last week,” Lancers’ head coach Jason Bumbaca said. “We came out and tried to put in the work.”

Davis (2-0) is undefeated for a reason, however, as they would intercept Cordova (0-2) senior quarterback Joey Estrada on the Lancers’ first offensive play on the night and parlay that into a quick two-yard scoring run by Davis’ senior quarterback Brennen Garvin. That would be a trend on the evening as Garvin tallied three rushing scores.

The Blue Devils would continue to find the endzone in the first half, taking a 34-0 lead into half-time in large part due to junior tailback Aaron Turner, who compiled three of his four rushing touchdowns in the first half. Turner ran 16 times for 152 yards in an impressive effort to lead Davis.

Although things would snowball in the second half, the Lancers continued to show signs of a team coming together. The team communicated well and remained energetic despite the lopsided affair, much to the liking of Bumbaca, who understands things may be rocky as he begins building the program in his image.

“I keep trying to tell them we have to keep getting better each week,” he said. “The thing is to just keep their heads up and staying positive, and just keep moving forward.”

For the Lancers, junior Kelton Stevens and senior Salvador Bautista had strong outings defensively as they were in on several tackles, with Bautista recording a sack.

Another big highlight of the evening was the team honoring former legendary coach Max Miller at half-time for his contributions to the program. Miller, who has the most wins by a coach in school history, enjoyed the moment and showed his support for Bumbaca and the football program.

“I know he (Bumbaca) is just getting started,” Miller said. “But he’s got some very good kids. It’ll be tough, but I wish them the very best.”

Cordova’s schedule won’t get any easier as they travel to Rio Linda High School on Friday, September 6, and take on the defending CIF Sac Joaquin Section Division 5-AA State Champions, with kickoff set for 7:00 p.m. 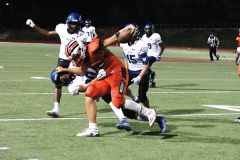 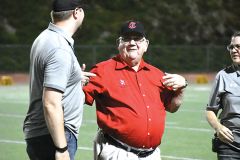 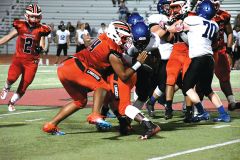