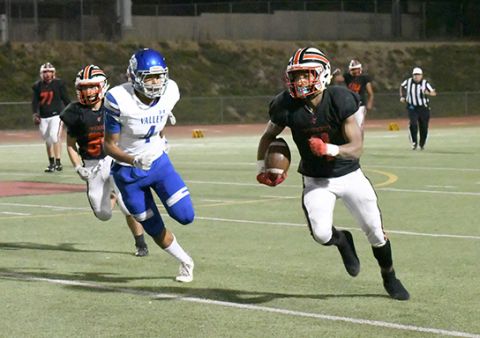 Wide receiver and all-around athlete Brandon Gray #1 provided his team with both its scores in the fourth quarter on Friday, November 1. Photo by Rick Sloan 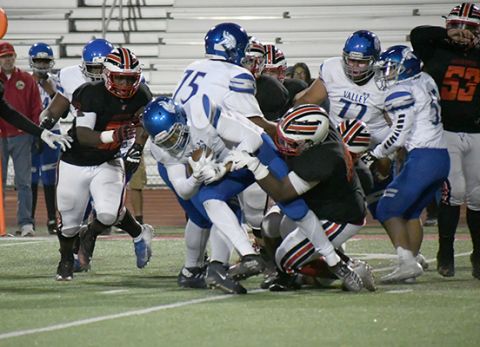 RANCHO CORDOVA, CA (MPG) - With slightly more than three minutes remaining and nursing a five-point lead in their season finale versus Valley this past Friday, the Cordova Lancers' varsity football team was in position to end their season on a high note in front of their home crowd inside Lancers Stadium.

But in what seemed to be a microcosm of their season, the ball just didn't bounce their way as the Lancers fell 14-12 after a late collapse.

Following a fumble recovery by Lancers' senior running back/defensive lineman Kenny Brown, Cordova had the ball on the Vikings' 14-yard line with a chance to put the game out of reach. On third-and-nine from the eight yard-line however, a bad snap was recovered by Valley, giving the Vikings (4-6 overall, 3-1 Greater Sacramento League) hope with under two minutes to go. That was all they needed.

Nine plays later, Vikings' senior quarterback Isaiah Tongson lofted a screen pass to junior tailback Will Mapp, who sprinted into the endzone from 19 yards out. The extra point was the icing on the cake, as Cordova would not be able to counter with just 26.8 seconds left.

Following the game, Cordova head coach Jason Bumbaca spoke of the tough loss, and what ultimately was a tough season in his first year at the helm as the Lancers finished 1-9 overall, including a 1-3 record in the Greater Sacramento League.

"It's tough," Bumbaca said. "As a coach you don't want to have the record we do, but sometimes that happens. The ball bounces the wrong way. Nobody knows what goes on inside this program except for us, and we know what went on. The seniors are great guys, I love them, and they put the work in. A lot of them are going to be able to go play at the next level."

One of those seniors, senior all-purpose threat Brandon Gray, stole the show on Senior Night for the Lancers with a stellar second half performance. Gray entered the game at quarterback for senior quarterback Joey Estrada to start the second half after a scoreless first two quarters of play, and provided his team with both its scores in the fourth quarter. Gray would keep it himself from two yards out early in the quarter to score the first touchdown of the contest, and would follow that up with an 80-yard kick return following an ensuing Valley touchdown that gave the Vikings a 7-6 lead. Gray would put Cordova ahead briefly before the late score by Valley to end the game.

Gray finished the game with 13 carries for 112 yards and a touchdown on the ground, and tallied 32 yards passing on two completions to go along with the 80-yard kick return in a valiant effort that drew the praise of his coach.

"The young man is a dynamic player," Bumbaca said of Gray. "He's been our top athlete all year. The young man can do whatever he wants on the field. He's a wide receiver by trade, but he's just an all-around athlete."

After winning the Greater Sacramento League title and earning a postseason berth a year ago, the Lancers find themselves outside of the playoffs this season in what has been a learning year for coach and player alike. Even so, Bumbaca couldn't help but gush about his teams' effort this year.

"I told them I was proud of them," Bumbaca said of his message to the team following the game. "I'm proud of how far we've come, not only on the field but in the classroom. They've done a good job on campus of trying to be good student athletes. That's the ultimate goal." 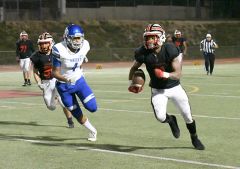 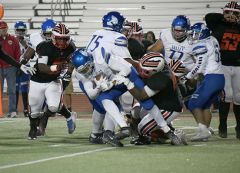 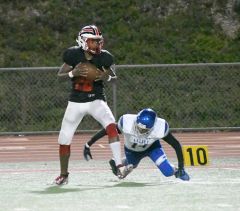