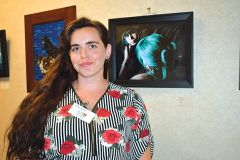 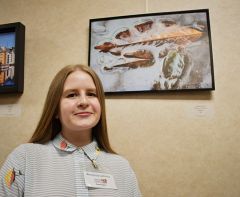 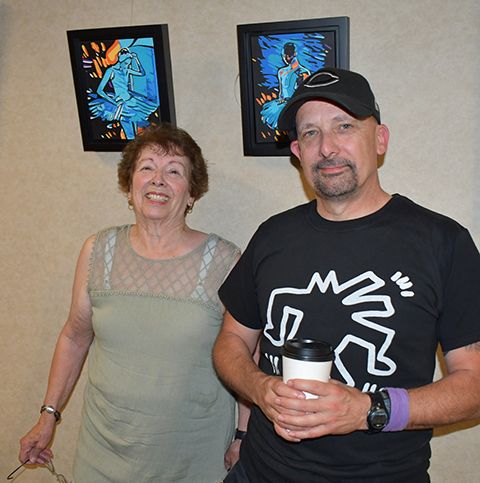 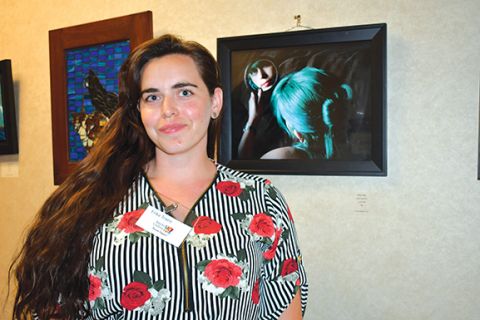 “I’m just very happy that I got to enjoy this experience,” said Erika Traen at the Artist Reception. She is shown with her photograph titled “Self Portrait.” Photo by Rick Sloan 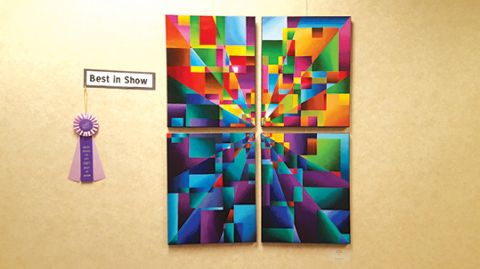 RANCHO CORDOVA, CA (MPG) - The third City Hall Art Show of 2019, running July 29 to October 20, included a Best in Show prize, which has been an added feature of this event since January. “I think next year we might go to a first, second and third place,” said Cheryl Gleason, MACC event coordinator and curator. This quarter’s Best in Show was Karl Edberg with his painting in acrylic, Ethereal Winter. The current show theme is “Reflections,” and this show has more pieces of art in it than any of the preceding summer shows. The show can be seen at City Hall from 8 a.m.-5 p.m., Monday-Friday, at 2729 Prospect Park Dr., Rancho Cordova.

Among the artists submitting to this show for the first time are photographers Anastasia Golosna, 24, and Erika Traen, 27.

Originally from the Ukraine, Golosna came to the United States when she was 6 years old. Her father was a professional photographer. “When we moved to America I would always see him with a camera,” Golosna said. “Naturally I would always grab a camera, and I fell in love with it.” Golosna’s first thought when she heard of the theme “Reflections,” was that of a person reflecting in thought. “I’ve been doing a lot of reflecting in the past year, just in my own life,” Golosna said, “reflecting on who I am as a person, who I want to be as an artist, who I am as an artist.” The titles of her photos are Time Waits for No One, Fallen Kings, and Reflections of Autumn.

Traen has been doing photography since she was in middle school. Her three photos in the show are Self Portrait, American River, and Convict Lake. She is passionate about photography and views it as a hobby that she wants to continue to enjoy. “In that case,” she said, “you shouldn’t do it for money or as a means to live because it puts more pressure on you and it becomes not as enjoyable.” She photographs as a means of capturing a moment or a visually attractive setting in order to remember and share it. “I’ve had a lot of people say that they love and they enjoy seeing all my photos,” Traen said, “because I go to all these places that they haven’t been able to go.” One of Traen’s photos, American River, sold during the Artist Reception on July 31.

One of the regulars in the City Hall shows, Ron Hall, works in many different media. He chose photography for two of his three entries in this show. “Photography has been something I’ve looked at over the last few years... Looking at it from the artistic standpoint and the light and just the design... I thought they would go with Reflections.”City by the Bay in black and white shows the Golden Gate Bridge reflected in a mud puddle. Skylines, in color, shows a glass-windowed skyscraper looking from the bottom up to the top of the building where it melds with the sky. “It just really reflects and absorbs the sky into it,” Hall said. “I just thought it was an interesting piece, so I took that photo with a cell phone.” Hall’s third piece is an acrylic diptych of two different ballet dancers.

Gleason herself has a sharp and colorful photograph in this show, taken in the city of Allsund, Norway. Her art has appeared in previous City Hall shows.