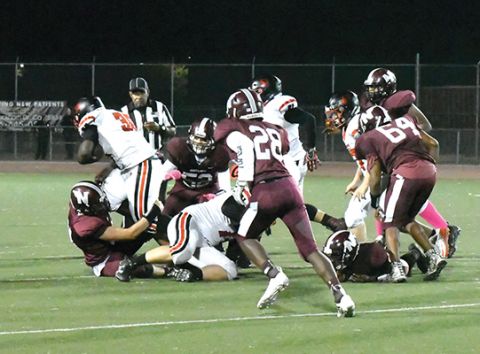 Dumarier Hackett #35 makes a big gain through the middle for the Cordova Lancers. Photo by Rick Sloan 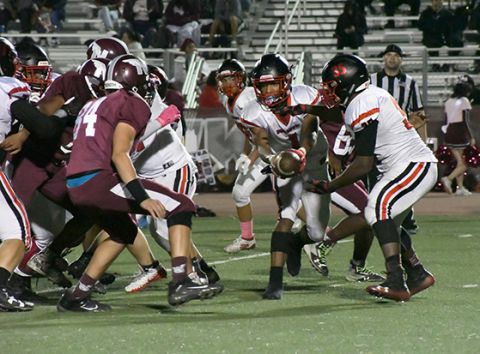 Senior Brandon Gray #1 passes the ball to Dumarier Hackett #35 in the game against Natomas. Photo by Rick Sloan

NATOMAS, CA (MPG) - On the heels of a disappointing 43-12 loss at Natomas last Friday evening, the Cordova Lancers' varsity football program could certainly hang their heads down. The loss resulted in the team being eliminated from CIF Sac Joaquin Section playoff contention, and saw two key starters lost to injury in senior quarterback Joey Estrada, and senior tailback Kenny Brown.

Yet, as the team prepares to host Valley this Friday, November 1, in their season finale scheduled for 7:00 p.m. at Cordova, the Lancers (1-8 overall, 1-2 Greater Sacramento League) are preparing to do what they've done every game all season.

Fight until the very end.

"We're preparing for the game how we normally prepare," Cordova head coach Jason Bumbaca said. "We're lifting weights and watching film, and have been productive at practice. We're business as usual. These kids amaze me. They love the game of football."

In spelling Estrada against Natomas (2-7 overall, 2-1 GSL), senior all-purpose player Brandon Gray tallied 191 yards passing, including an 81-yard bomb to junior wideout James Feao in the first quarter. Gray also rushed for a touchdown on a four-yard scramble play in the second half to cap off his performance. Additionally, junior Tavion Dominguez-Thomas caught five passes for 104 yards in a breakout effort.

The Lancers' season finale will end what has been an up and down season for Cordova under Bumbaca, who will be wrapping up his first season with the program. The team certainly hasn't won as many games as he would have hoped, but Bumbaca is pleased with the trajectory of the program going forward under his watch.

"There's work to be done obviously," Bumbaca said. "It doesn't look positive in the win-loss column, but these young players have put in a tremendous effort this year even when things weren't going well. I think the program is moving in the correct direction."