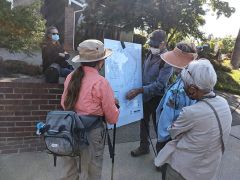 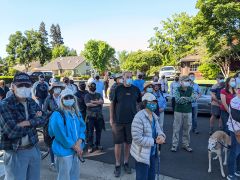 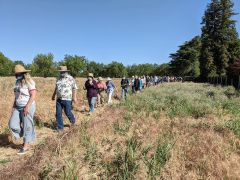 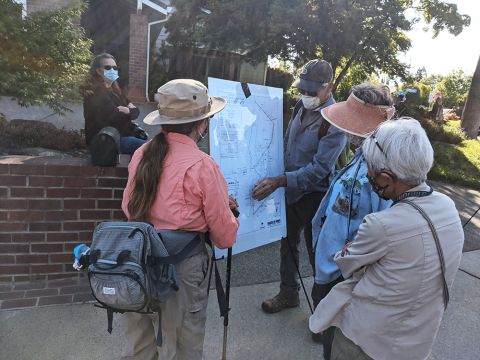 Mark Berry displayed large-scale maps of the property to show residents the location of the recorded public easements. 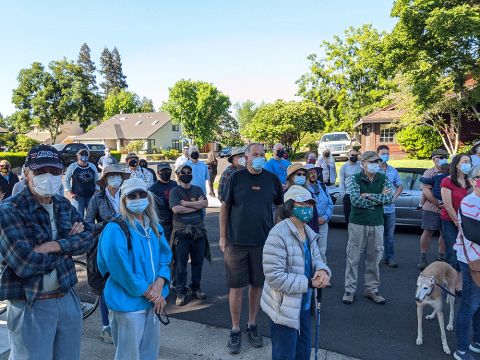 Locals gathered in a quiet cul-de-sac on the morning of May 1 before accessing public easements at the end of Stirling Park Drive.

RANCHO CORDOVA, CA (MPG) - More than 150 locals gathered on May 1 to enter public easements at the end of Stirling Park Drive, walking west through the Kassis property toward Mira Del Rio. The goal of the demonstration was to increase community awareness about the easements and assert their rights to public use.

The 40-acre Kassis property—located along the American River just north of Folsom Blvd. in Rancho Cordova—is one of the last undeveloped wildlife habitats in the area. After learning last year about a housing development proposed on the property by Trumark Homes, neighboring residents grew concerned. Although it is privately owned, public easements were granted through the property back in 1973—with an access point near the end of Stirling Park Drive heading west toward Mira Del Rio and north along the property line toward the river. Despite the official recording of the easements, neither Sacramento County nor, after incorporation, the City of Rancho Cordova has enforced or maintained the easements for public use.

Last year, neighbors submitted complaints to the City of Rancho Cordova regarding various fences blocking the public easements through the property. Owners of the property were cited at the end of October 2020 for a violation regarding a chain link fence with barbed wire, which is prohibited in residential neighborhoods. The violation also noted that the fence, located at the end of Stirling Park Drive, was blocking access to the public easements.

Documents received through a public records request revealed that the property owners were amenable to replacing the chain link and barbed wire fence with a new fence of City-approved materials. But when Code Enforcement advised that the fence would need a large opening to accommodate access to the public easements, the owners requested a hearing to appeal—arguing that the official access point was actually south of Stirling Point Drive, presumably in a residential backyard as the surrounding developments did not exist at the time the easements were originally granted.

That hearing was scheduled for April 20, 2021, but City Manager Cyrus Abhar announced at a City Council meeting in early April that the hearing had been canceled because the owners removed the fencing and withdrew the appeal. The City’s current position is that the violation has been corrected.

However, concerned neighbors contend that the initial complaint included all fencing blocking easements on the property, not just the chain link fencing at Stirling Park Drive. The recorded easement from Stirling Park Drive west toward Mira Del Rio is still blocked by a wooden fence, white rail fence, and the owner’s horse corral. Residents want to know why the complaint wasn’t addressed in its entirety.

When asked if the cancelation of the appeal hearing meant the City would now enforce the easements for public use, Communications Officer Ashley Downton could only offer this following statement: “The City will continue to work with [the owners] on the easement moving forward.” She was unable to provide any further clarification.

Communications and Public Affairs Director Maria Chacon Kniestedt initially stated, based on information she received from other staff members, that the violation issued at the end of October 2020 was not instigated by a resident complaint but by an observation made by a Code Enforcement officer. Kniestedt further stated that recent resident complaints about additional easement issues were currently under review. However, residents are skeptical of that timeline, providing emails showing they notified the City about fencing and easement issues as early as September 2020. Kniestedt is currently reviewing these assertions and was not able to comment before this story went to press.

Some residents have grown increasingly frustrated at what they perceive to be a lack of transparency from the City, spurring the recent demonstration on May 1. Sergio Diaz, one of the event organizers, said the community has decided to force the issue: “We’re opening the easements now through our actions. … We’re going to take them and use them and see what you want to do about it.”

Much of the resident concern comes from the fear that the City Council will approve the Trumark development and agree to abandon the public easements, despite community opposition. Residents view this possibility as a worst-case scenario that would destroy wildlife habitat and take away a public right that they have been unable to access for decades. Many attendees said they would like to see the land preserved as part of the parkway, and the easements marked to increase safe connectivity for walking and biking paths. Currently, bikes and pedestrians have to travel along the busy and potentially dangerous thoroughfare of Folsom Blvd., so residents say that opening and maintaining the easements will bring a significant benefit to the community of Rancho Cordova.

Diaz said the demonstration was the community’s way of “telling the Council ‘No, don’t give these easements as a gift to the developer and the Kassis family.’”

Mark Berry, another event organizer, told the crowd, “These are public. You have a right to use them.” Berry speculated that the City was waiting for the opposition to go away, but “we’re not going away,” he said—to enthusiastic applause from the many demonstrators.