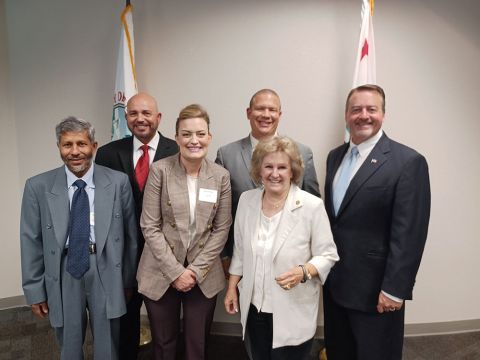 Rancho Cordova City Councilmembers Garrett Gatewood and Vice Mayor Linda Budge are sitting councilmembers, and Sheikh Zulkader, a California Independent Systems Operator IT specialist, is also vying for a seat in the Council.

Speaking for the Sacramento County Supervisor race in District 5 is Elk Grove Councilmember Pat Hume, a native of Elk Grove who graduated from Jesuit High School and has been serving the community in various functions and diverse nonprofits for 16 years. Also running in this race is Jaclyn Moreno, who is in the Cosumnes Community Services Division 2 District Board of Directors, and also the business owner of CARE Educational Services.

In the FCUSD Board of Education race were incumbent District 5 Board Member Ed Short and candidate Jennifer Laret, a Volunteer of the Year Award recipient who is currently the Vice President of A4 Promotions & Incentives.

FCUSD Board Member Ed Short said, “I have been holding office since the time Rancho Cordova underwent the cityhood process in 2003. And, at that time many encouraged me to run for office. I have since then been FCUSD Board of Education president 3 times. And in my time on the FCUSD Board of Education we’ve constructed a new theater, upgraded the football facilities and promoted a STEM curriculum among many other projects.”

“I don’t have a political bone to pick,” said Short, “I just want FCUSD students to have the best education.”

FCUSD Board candidate Jennifer Laret said, “I have lived in Rancho Cordova for 20 years, and it’s been an amazing place to live with my family of 4 children. But I would not agree that to learn in Rancho Cordova is very amazing,” she said.

“The bonds are not working because Rancho Cordova is not a priority at FCUSD. Instead, our schools have deteriorating facilities, and our student test scores are declining,” Laret said.

She finished saying, “Our students see that their peers in Folsom have access to brand new school facilities. I want to be the voice for them and their parents.”

The Sacramento County Supervisor race was launched after Supervisor Don Nottoli announced that he would not run for re-election in District 5 after seven terms.

Jaclyn Moreno is one of the Sacramento County Supervisor candidates for District 5. She is the Cosumnes Community Services Division 2 District Board of Director and the businessowner of CARE Educational Services.

As an Elk Grove resident, Moreno said, “This race is really about two things: values and experience. I am the Pro-Choice candidate in this race, which is significant in the wake of the recent Dobbs decision; and I am a climate champion.” Moreno helped in the creation of her district’s first Climate Action Plan.

The other important aspect in this election, according to Moreno, is experience.

Moreno opened a small business 9 years ago in the field of mental health which now employs 25 workers. As a small business owner, she said she understands the day to day needs of the business community. Along with that, she said her professional expertise as a school psychologist has given her a unique perspective relevant to the growing homelessness in the County."

The councilmember said he has a broad coalition of supporters from nonprofits, local organizations, service clubs, government agencies, the business community and law organizations.

Hume said, “It is atrocious that crimes are going unpunished by authorities and leaders who turn a blind eye to it.” His approach is to take back the streets from lawlessness and get back to the basics of serving constituents.

The County’s priority should be to ask you: “How can I help you get what you need?”

After being overwhelmingly re-elected to City Council four times since 2006, he said, “I still have a little gas in the tank, and I hope you vote for me.”

She was proud to report, “We are building homes for everyone who wants to live here. Three new shopping centers are underway, bringing new retail and a grocery store. A senior residence and low-income housing are underway, and we intend to expand Mather Veterans Village.”

Councilmember Garrett Gatewood is also running to retain his seat in the City Council. He projected the City’s current trends and stated:

“Over the next four years,” he said, “I hope to bring a new high school to Rancho Cordova to meet the demand of our growing community. I want to spur job growth and economic development through investing in technology and infrastructure and attract new businesses. We must continue to build homes and remain the most business-friendly city in Sacramento County.

New to the City Council race this November is Sheikh Zulkader, who has degrees in the field of Electrical and Computer Engineering, an MBA and is currently earning his Ph.D. in Leadership Studies. He has been living in Rancho Cordova with his family for 17 years.

Zulkader said education is the chief way to improve the lives of residents and places a very high value on schools and their ratings. Many parents and students in Rancho Cordova, including his family, have had to confront the tough reality that Folsom schools provide better education and have better ratings.

He said, “[He] would like to make his first task at City Council the establishment of middle and high schools in the south side of Highway 50 and improve the ratings of existing schools in Rancho Cordova.